ECONOMIC DEVELOPMENT: Why Don't We Try Something Different for a Change?

It's 2011.  We have the tools and resources to be much smarter in our economic policies and development.

The case for smart economic development is simple but effective.  Look at what we consume in Sonoma County (by City too), calculate how much of that is imported instead of being produced or provided locally, and then figure out how to provide more of what we already consume by generating it here.

Michael Shuman, noted author and economist,  articulated the concept years ago when there was steady economic growth.  At that time it was largely ignored in favor of telling us to "shut up and buy more houses".
Not today.  We can't ignore it.  The reason is as simple as the concept itself.  Import substitution doesn't require economic growth through increased consumer spending or convincing businesses to move here. In fact it is an effective method for creating jobs even in an economic contraction.  If there was ever an economic development concept built for this time, this is it.
If I Could Wave a Magic Wand Over The Santa Rosa City Council Majority…they would be open-minded to creative ways to align economic policy with economic development.  Their remarks about a recent economic development conference they attended show that they are finding comfort in doing what other cities are doing.  And what other cities are doing is chest pounding and spewing bravado about being "competitive".  And who are they competing against?  Uh, other cities.  Peter Drucker once said, "I wouldn't find much comfort in knowing the patient in the bed next to me is dead."  This competitive, last-man-standing strategy is doomed to fail if every city is playing it.

General Plan Amendment for Bicentennial Marketplace is a Case in Point

The following synopsis omits environmental, housing and traffic impact analysis to focus on plain economics.
The applicant, landowner of the site at the northeast corner of Bicentennial and Mendocino, wanted a General Plan amendment that would allow him to develop retail on the site.
The planning commission, in lock step with the council folk who appointed them, said sure, sounds good to us.  The city council heard the case, and as was expected, said that's a big yes.  Ours, Sawyer, Bartley and Olivares in favor and Wysocky, Gorin and Vas Dupre opposed.
The story behind this final nod is crazy stuff and just makes dissenters suspicious of the process and the motivation for its approval.
First, the applicant submitted the amendment request with a project on the spearhead.  Three-fourths of the retail pad was intended to be a Sprout's Market.  Sprout's reps and the developer (both from Phoenix) came to Santa Rosa and took serious steps to move things along, most notably meeting with a neighborhood group.
The grocery natives saw where that spearhead was pointed and naturally rose up in arms to stop it.  According to Nielsen Site Reports (world leader in data and market analysis), within a 2-mile radius of the applicant's site there are more grocery retail sales than there is projected demand.  $105 million more sales capacity than needed.  The supply exceeds the demand, which means it is a very hot competitive zone. Which means, Sprout's intends to poach market share from all the players.  Which means the existing grocers are going to have to implement drastic measures to hang onto their market share.  Things like reduce wages or eliminate jobs altogether.
The applicant, seeing all the uproar about Sprout's, worked with Community Development staff to segment (read separate) the project from the amendment request.  After all, they wanted to have an amendment, not battle protestors.  It passed the planning commission without the project attached.  But, the damage had been done and the Sprout's connection flapped like a wet beach towel tied to the spoke of a wheel. Everyone knew it was there, but had to pretend it didn't exist (wink, wink, nod, nod).
The city council approved retail for a site that according to two reports, ESRI (used by the city) and Nielsen Site Reports (used by GoLocal) that show current supply exceeds demand for general retail and food and beverage stores.  Here are the results for a 1-mile radius (ESRI) and 2-mile radius (Nielsen).
1-mile
Retail = $81 million surplus
Food and Beverage Stores = $56.5 million surplus
2-mile
Retail = $557 million surplus (this includes eating and drinking places)
Food and Beverage Stores = $105.7 million surplus
The city's ESRI report shows there are 12 food and beverage stores, which includes 7 grocery stores within the 1-mile radius.  When expanded to a 3-mile radius in the same report there are 42 grocery stores and a surplus supply of $46 million.  "Oh look honey, a new grocery store.  Now we can finally eat!"

Go back to the top of this story and read the first three paragraphs.  We have the power and resources to create jobs without recruiting out-of-county businesses to move here or relying on more consumer spending. We can start today.  Think of it as a sprint strategy that can produce results in the next year, generate high economic multiplier effects and serve as a springboard for many job growth projects simultaneously.
Stop wasting time and resources on creating more of what we don't need and focus on opportunities to fulfill things we already buy.  GoLocal has identified sectors within our local economy that represent gaps in local demand and supply, i.e. where we are not self-reliant in fulfilling demand.  That is called leakage.  When we plug the leaks, we create jobs.  In our first pass, we've identified about 20,000 jobs with an earning potential of approximately $1.2 billion for Sonoma County residents.  That would reduce our unemployment rate significantly, assuming many of the new jobs matched the profile of the unemployed.
When we plug the leaks with local resources (locally owned businesses and local capital), we generate a favorable economic multiplier that expands the economic benefits.
Let's get started.  Here are a few of our favorite categories for job growth based on the method we described.  The industry names are from NAICS; "Percent self-reliant" means we produce/provide equal to our demand (100 is normal); "new jobs" represents 100% self-reliance; "earnings" is based on department of labor data. 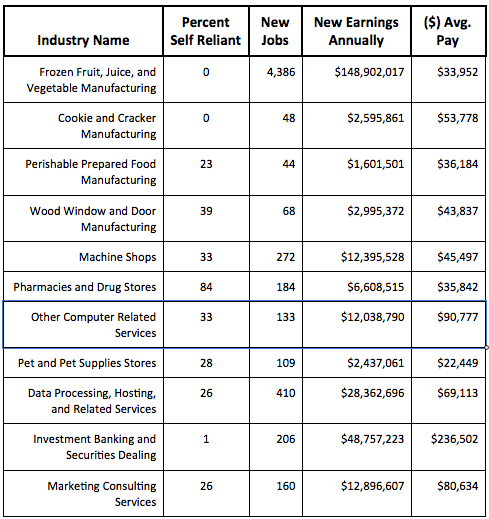