Mindfulness with your money matters - Investing and Giving

Election day is less than a week away, and it is shaping up to be an important one for the future direction of our government.  Get out and vote, and while you do, remember that your political votes are only the beginning of your power to make your voice heard.  Much more important to creating enduring well-being in our communities are the "economic votes" we make everyday, often without much thought.

Last week, I published an article on the power of our shopping and banking decisions, and why it is important to shop and bank locally.  This following article discusses investing and giving, and the potential benefits if we make the shift to local.

Where we invest is of particular importance, and is a virtually untapped opportunity to vote with our dollars through the funds that we put into stocks, bonds, retirement accounts, and other financial assets.  Economist Michael Shuman, author of Going Local and The Small-Mart Revolution, has long advocated community investing as a key potential driver for local economic development.  The problem - According to Michael, there is around $26 trillion dollars of investment wealth owned by households throughout the U.S., virtually none of which is being invested in community-scale businesses.
Based on Census Bureau data and the breakdown of average household financial assets compiled by the Federal Reserve, there was a staggering $23.8 billion dollars of financial assets in Sonoma County in 2007. Even assuming a 25% loss of value from 2007 to 2010, there are still $17.9 billion of financial assets controlled by Sonoma County residents.
Where is our money going?  Essentially all of our investments go to Wall Street, and are packaged and marketed in such a way that most people have no idea what they are really investing in. Even the socially responsible investment industry, which has grown significantly in the last two decades, has less than stellar ethics and transparency. Below is a table showing the top ten holdings of a mutual fund offered by the World’s largest socially responsible mutual fund company, Calvert Funds, which is a telling example of the “green washing” going on the investments industry. 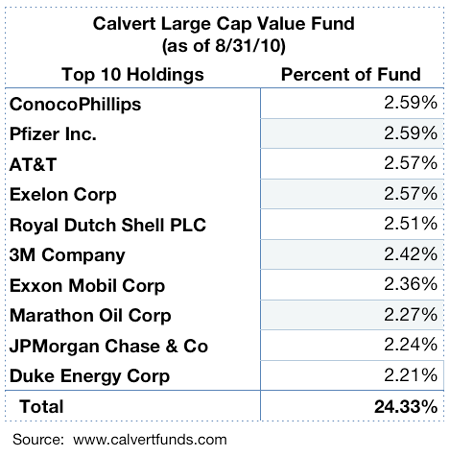 Small businesses (those with 500 or less employees) account for about 50% of the economic output of this nation, but receive almost none of the investment. The main reason for this imbalance is archaic securities legislation, adopted in the 1930-40’s for the purpose of protecting investors, that makes it prohibitively expensive for businesses to meet the disclosure and filing standards required to accept investment from anyone but the richest 2% of Americans. Unfortunately, the recently passed financial reform bill makes it even more difficult for small businesses to raise capital.
Nationwide, innovative thinkers are working diligently to change the laws, and develop creative ways to work within the existing laws, to connect investors with their community businesses. Locally, the Sonoma County GoLocal Cooperative, as part of its long-term strategic plan, hopes to be able to facilitate local investing through small-scale business development programs. For more information on this important topic, visit www.cuttingedgecapital.com.

The Center on Philanthropy at Indiana University estimated total U.S. charitable contributions at $303.75 billion in 2009. This is a drop in the bucket compared to the $10 trillion U.S. consumers spent in 2009, but is quite a large amount in and of itself.  Based on data from the Census and Bureau of Labor Statistics, Sonoma County households made an estimated $298 million in cash contributions in 2009.  These estimates do not include the volunteer hours and community service contributed by generous people locally and across the country.
Like the money spent at locally-owned businesses, more of the money donated to locally-based non-profits stays here to create more economic activity, jobs, and benefits for the local community. In addition, by supporting those that need help locally, it increases the overall well-being and cohesiveness of the people in our communities.
When it comes to giving, it is not just about money. Volunteering time can in many cases be more impactful both on the people for whom you are volunteering and for yourself, as you get quality experiences that just donating money cannot provide. Also, donating lightly used items that you no longer need to organizations like Goodwill and Salvation Army increases local resource efficiency, diverts waste from the dump, and, most importantly, allows those in need to increase their quality of life for a fraction of the price.

All of us, in our roles as consumers, depositors, investors, donors, employees, and business owners, have the potential to make a difference every day with our economic decisions. Rather than being at the whim of the powers that be, individually and collectively we can make a difference by Going Local First with our shopping, banking, investing, and giving decisions. In a society controlled by the almightily dollar, making our voice heard through our economic votes may be our only hope.