This article from the Institute for Local Self-Reliance details the specific ways in which Amazon abuses its market dominance to harm smaller competitiors and what Congress needs to do.

Most Americans believe that Amazon’s outsized power is dangerous and must be reined in. A recent poll found that nearly 80 percent of voters believe Amazon should be subject to greater regulation, and more than half support breaking it up.

A growing number of lawmakers are moving to do just that. A 15-month investigation by the House Judiciary Committee concluded that Amazon “has monopoly power over many small- and medium-sized businesses.” It called for breaking up the company by separating its major business lines into stand-alone firms and regulating its online marketplace to ensure that sellers are treated fairly. Both Democrats and Republicans have voiced support for these measures.

As lawmakers have grown increasingly serious about addressing Amazon’s harms, Amazon has sought to portray itself as beneficial to independent small businesses. In splashy campaigns, press releases, and lobbying at the Capitol, Amazon contends that it has “a mutually beneficial relationship” with the small businesses that depend on its platform, that these businesses are “thriving,” and that “our interests are well aligned.”

Small business owners themselves tell a very different story. In a 2019 survey, three-quarters of independent retailers ranked Amazon’s dominance as a major threat to their survival, and only 11 percent of those selling on its site described their experience as successful. It’s not only  retailers; small consumer product manufacturers, book publishers, and other creators are also imperiled. All of these small businesses are trapped in Amazon’s monopoly gambit: the tech giant controls access to the online market, which leaves them little choice but to sell on its platform. Yet doing so allows Amazon, also their competitor, to exploit and undermine them.

Congress shouldn’t let Amazon dictate whether and how small businesses can compete online. If policymakers do not act to check Amazon’s outsized power, they’re effectively allowing Amazon to be a private regulator of the online market, deciding which businesses may reach customers and the price they must pay to do so.

To restore an open, competitive online market, policymakers must:

1. Break up Amazon along its major lines of business.

2. Require dominant digital platforms to deal fairly with the independent businesses that rely on them.

3. Block Amazon from engaging in abusive tactics by making our antitrust laws stronger and easier to enforce.

View the full fact sheet/report as a PDF here. 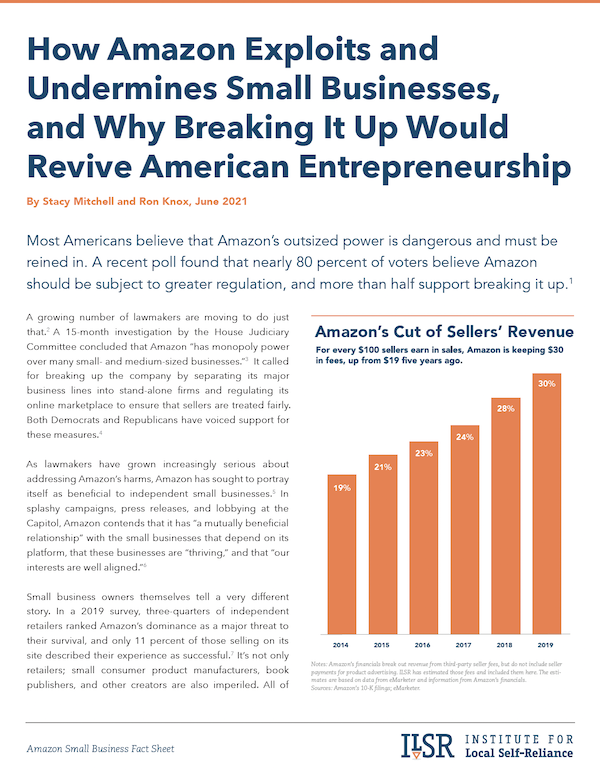