What do we mean by the Local Multiplier?

The Local Multiplier occurs when you spend your dollars at a locally owned and independent business instead of a chain store or online giant. Your dollars recirculate through your local economy 2-4 times more than money spent at a non-local company. As your dollars move through your community, the money generates more local wealth, charitable contributions, and jobs. 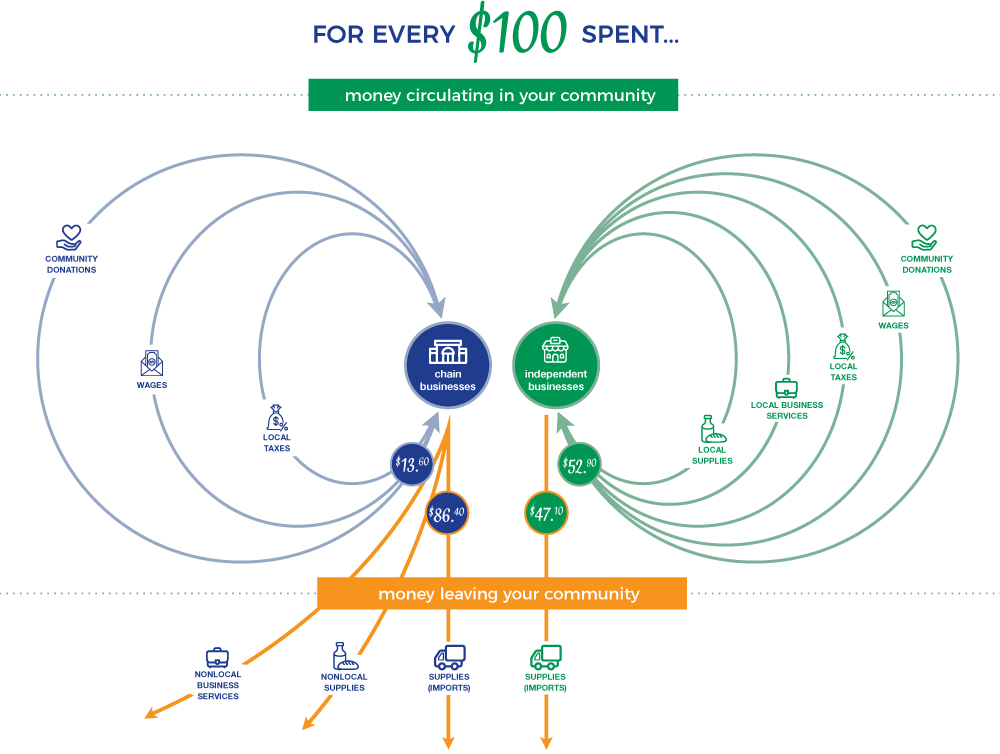 What causes the Local Multiplier to happen?

We can thank the actions of independent business owners for the Local Multiplier since they spend more of their revenue locally than chain stores and online giants.  “Say you spend money at a local pharmacy,” explains local economist and author Michael Shuman.  “Its employees then go to the supermarket, which might buy from a local farmer. The more times and the faster a dollar passes between hands without leakage, the more income, wealth, and jobs in a community.”

Who measures the Local Multiplier?

Civic Economics has conducted studies across North America measuring the difference in local economic return between local independents and chain businesses. These studies measure the direct and indirect impacts of spending dollars locally to determine the base level of local economic activity that results from a purchase made at a chain and a local independent business.

Their first study, for the city of Austin, Texas, showed that an independent bookseller and an independent music seller returned more than three times as much money to the local economy as a proposed Borders Books and Music outlet would. Other Civic Economic studies mirrored what was measured in Austin, showing a much greater Local Multiplier for independent businesses than chains. On average, 52.9 percent of each purchase at local independent businesses is recirculated locally, compared to less than 13.6 percent of purchases at chain stores.

The Institute for Local Self-Reliance conducted its own study of the Local Multiplier in several small Maine communities. Their study examined how much of a dollar spent at a local independent store is re-spent in the local area as payroll, goods/services purchased from area businesses, profits spent locally by owners, and as donations to area charities. ISLR’s study found that $100 spent at local independents generated $45 of local spending, compared to $14 for a big-box chain.

Measuring the Local Multiplier in your community

The Local Multiplier helps Independent Business Alliances (IBAs) make a strong case for their work. A community armed with this powerful local data can use it to make better-informed decisions about where they spend their money. This power includes the spending of citizens as well as local governments and other area institutions.

Carrying out a Local Multiplier study does require a local sponsoring organization to recruit participation from independent storefront retailers. To learn more about working with Civic Economics, download this introduction to the process.

“Local purchasing is the backbone of local economic development and, consequently, one of the first major activities of an Independent Business Alliance,” said Shuman.  “And the good news is that it’s not difficult to do. The more consumers know, the more they choose local. A Shop Indie Local campaign is a terrific way of building public interest and confidence in a larger vision of a healthy, resilient local economy.”

With any study conducted for your community, ensure the methodology (the explanation of how the authors figured out the results) is clear. Also, ensure your message is easy to remember. Saying, “independent retailers return more than three times as much money per dollar of sales than chain competitors,” is a far more memorable phrase than talking in terms of percentages or comparing $0.53 to $0.14.

You can also add, “buying remotely on the web creates almost no local benefit–just a few minutes work for a delivery person.” You can add, “Spending at locally owned businesses generates ripple effects that create more local jobs and wealth.” Calculating the added local wealth generated by a 10% shift to local independents is one tactic successfully employed by several communities. Finally, add a link to your study to offer a way for community members to dig deeper into the data. 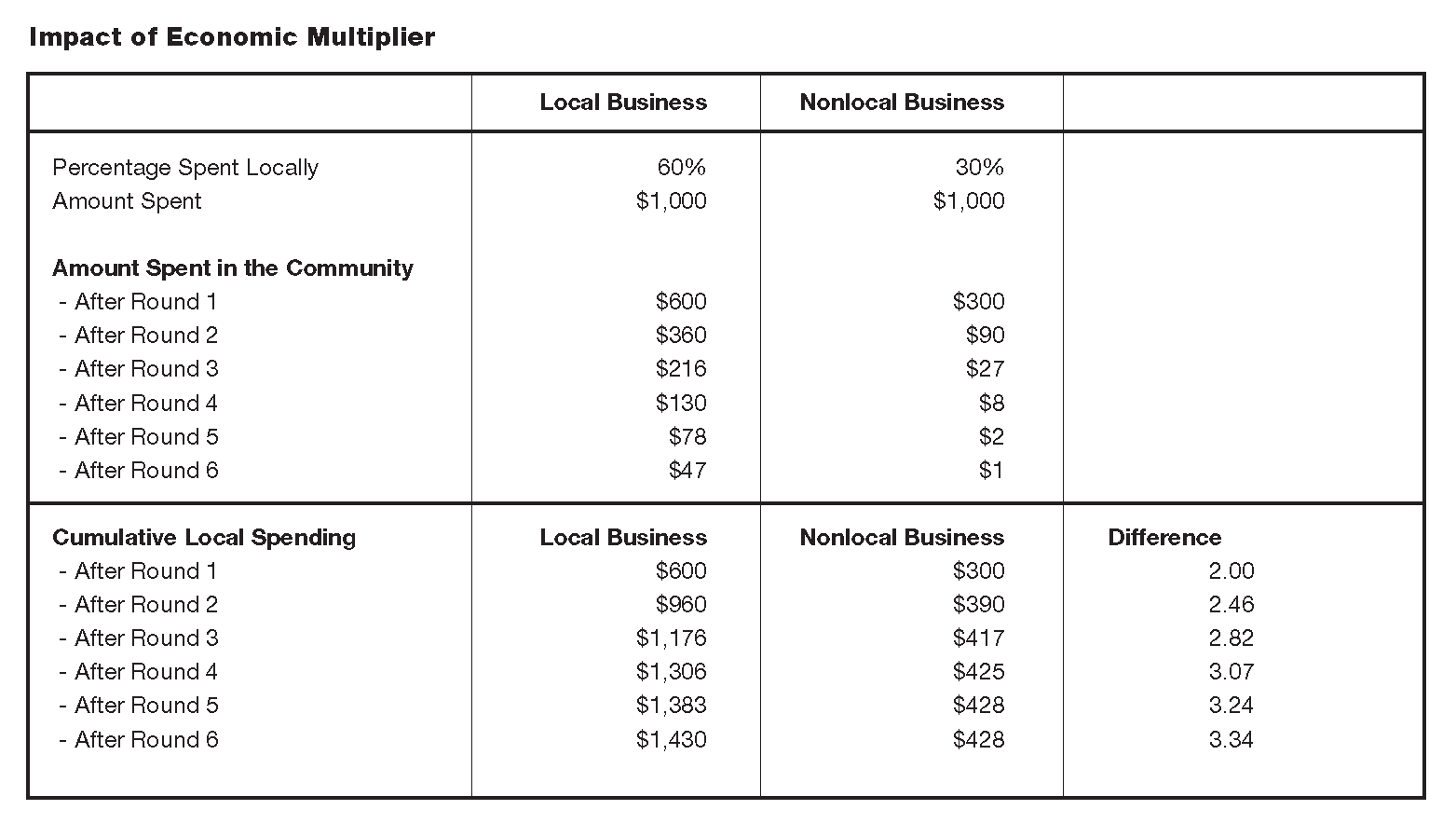 Variations on the theme

The size of the Local Multiplier Effect varies depending on the type of business. Restaurants and service providers generate a large multiplier because they are labor-intensive and, therefore, more business revenue goes to local payroll.

Why the difference? Unlike Borders, the local bookstores had a high-level management team, used local business services, advertised locally, and enjoyed profits locally. The study suggested that every dollar spent at the local store contributed three times the jobs, income effects, and tax benefits to the local economy.

Unless a business sources an exceptionally high percentage of goods locally, most retailers create a more modest multiplier than restaurants. This figure does not mean restaurants are better for economic development than retail. Many retailers have sizable revenue and professional job opportunities essential to local economies.

It’s helpful to be aware of these differences because the mix of businesses involved in a particular study will influence the results of a Local Multiplier study done for your community. 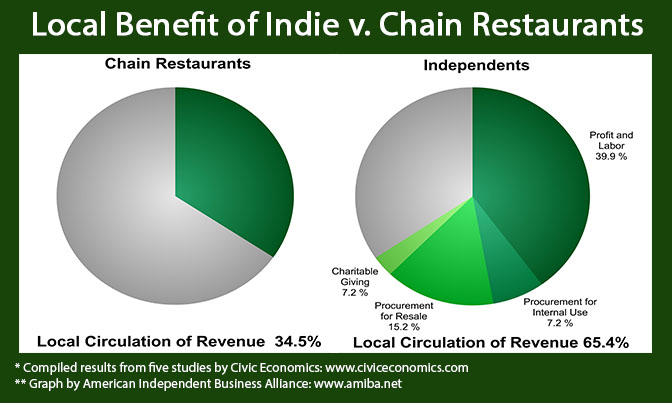 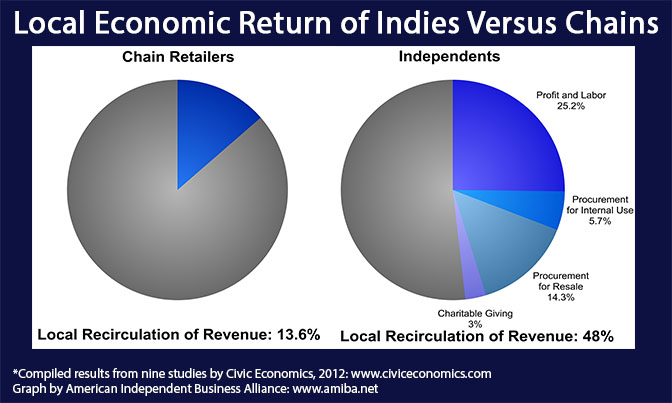